His brand new studio recording, Gordon Mote Sings Hymns and Songs of Inspiration, is irrefutable proof that Gordon has a way of making familiar songs seem new and new songs feel timeless. Indeed, part of Mote’s appeal is his remarkable ability to connect the past with the present and today’s audience with that mighty cloud of witnesses that have gone before us.

Gordon reflects, “Growing up in our little town of Gadsden, AL, our whole family would listen as Harry Butler hosted ‘Songs of Inspiration’ every Sunday morning on WGAD Radio. Even though we were just kids, my brother and I couldn’t wait to hear the latest songs from new and familiar groups. Over the decades, ‘Songs of Inspiration’ has blessed—and still blesses–lots of folks. In some small way, I’m hoping to honor and extend that legacy with this new project.”

Produced by Mote and industry legends Phil Johnson and Wayne Haun, this all-new treasury of traditional favorites and new classics blends Inspirational, Southern, Country and Pop styles to create an album that is fresh yet ageless.

In addition to such beloved hymns as “Power in the Blood,” “Amazing Grace,” “I Surrender All,” and “Just As I Am,” Gordon introduces his audience to the contemporary worship classics, “Because He Lives (Amen)” , “Holy Spirit,” and “O, The Blood.” Famed gospel producer/arranger Percy Gray, Jr. adds Chicago Mass Choir’s trademark gospel vocals to “Precious Lord, Take My Hand” and The Voices of Lee lend their considerable choral prowess as well. Mote contributes his own inspiring song craft to the debut single, “Only Jesus Can Heal This Hurting World.”

Gordon Mote Sings Hymns and Songs of Inspiration comes hot on the heels of Mote’s 2013 Dove Award-nominated album, All Things New. Co-produced by Mote, legendary Country producer Frank Rogers and 8-time Dove-Award winner Wayne Haun, All Things New featured a Who’s Who of Gospel and mainstream artists (Trace Adkins, Jason Crabb, Sheryl Crow, The Gaither Vocal Band, Scotty McCreery, Darius Rucker, Josh Turner, and Matthew West). The CD garnered Dove Award nominations for Best Country Gospel Album (2014) and Best Country Gospel Song (for “Ain’t It Just Like the Lord” in 2015) and produced the popular singles, “Faith Like That” “Meanwhile Back at the Cross,” and “The Other Side.”

By any definition, Gordon is one of today’s most respected talents; in large part because of his musical and spiritual heritage. He’s never forgotten to tell people along the way where he’s from.

His 2012 release, Songs I Grew Up Singing, celebrated landmark songs that not only shaped his music and ministry but also inspired a generation of Gospel music lovers. The CD included the Gaither classic, “This is the Time I Must Sing,” Dallas Holm’s “Rise Again,” Andrae Crouch’s “Through It All,” and The Hinson’s “Call Me Gone.”

It’s easy to understand why Gordon’s roots go so deep.

Blind since birth, Mote’s faith provides the foundation for his life and constantly fuels his creative spirit. When he was just three, Gordon surprised his family on Thanksgiving by sitting down at the piano and miraculously playing “Jesus Loves Me” with both hands. “I was just passionate about music,” states the Attalla, Alabama native. “My music is so eclectic today because I listened to every album I could get my hands on growing up. As kids, my brother (who is also blind) and I traveled and sang in churches of all sizes and denominations.”

As a young man, Gordon became one of the first blind students in the country to be mainstreamed into the public school system and later received a full scholarship to Jacksonville State University in Jacksonville, Alabama. After three years at JSU, he transferred to Nashville’s Belmont University and graduated with honors. Two days after graduation, Country music legend Lee Greenwood asked Mote to join his band. Since then, he’s toured with Trisha Yearwood, Tanya Tucker, Porter Wagoner, the Gaither Vocal Band, and the long-running Gaither Homecoming Tour.

As a studio musician, Mote’s big break came when Country Music Hall of Fame keyboardist Pig Robbins (who is also blind) was unable to make a session and recommended that Gordon fill in. That particular day, Alan Jackson cut the poignant 9/11 tribute, “Where Were You When the World Stopped Turning?”—the first number one single on which Gordon performed.

Since that time, he has played for music’s biggest names, including Brad Paisley, Blake Shelton, Martina McBride, Bob Seger, Alan Jackson, Rascal Flatts, Carrie Underwood, Lionel Richie, Josh Turner, Darius Rucker, and Alison Krauss—to name a few. His unmatched studio prowess has earned him two Academy of Country Music Awards for top piano/keyboard player as well as two Music Row Magazine Instrumentalist of the Year Awards (2009, 2011) for playing on the most top ten albums. Gordon is honored and humbled by the artists and producers who place their trust in him, “I always try to bring my creativity and do the very best I can.”

Since stepping into the spotlight as a solo artist, Mote has recorded an impressive body of work—three instrumental and seven vocal albums—including the Dove Award-nominated If You Could Hear What I See (2004), Don’t Let Me Miss the Glory (2007), and his acclaimed Christmas collection, The Star Still Shines (2012).

Ironically, part of Mote’s appeal is related to something he can’t fully experience: videos. In addition to his presence on the wildly popular Gaither Homecoming Video Series, Gordon has more than 200 individual video performances that have been viewed more than 3.3 million times on YouTube, the world’s largest music and video platform with over one billion registered users. Several lyric videos from Gordon Mote Sings Hymns and Songs of Inspiration are being released to his growing global fan-base.

What’s old is new again, and both can be found in inspiring abundance in the musical repertoire of Gordon Mote. 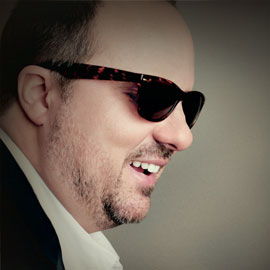